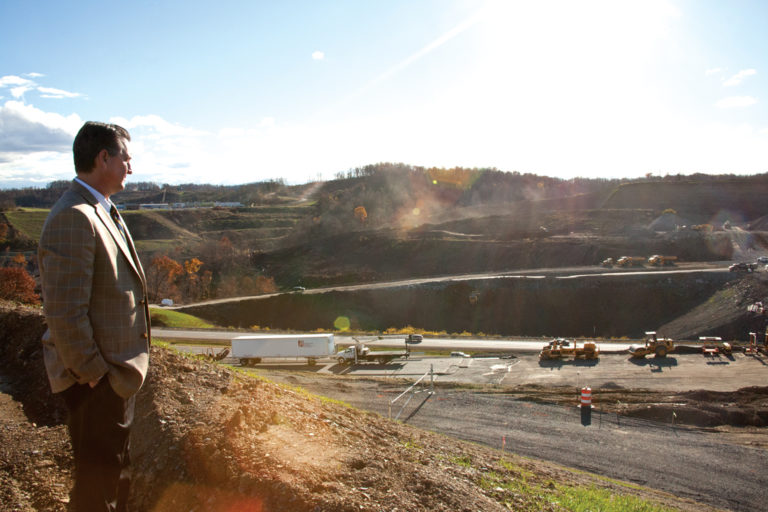 Jason Donahue is the Morgantown Area Chamber of Commerce’s 2018 Milan Puskar Entrepreneur of the Year.

Jason Donahue sums up the work of FEOH Realty in five words: “We solve problems for people.”

Donahue and his wife, Janet, formed their commercial brokerage firm in 2011 after helping another firm for years acquire and develop sites for Walmart stores. They had a hand in the opening of about 80 Walmarts in eight states, developments that amounted to almost a quarter of a billion dollars, Donahue says.

Their success in those ventures spawned a desire to see how they could help spur growth in Morgantown and the surrounding community. “I like seeing things change,” Donahue says. “I don’t worry about why it is the way it is. I think about what it could be.”

“We have a term in real estate: ‘highest and best use,’” he says. “I look for the opportunities to make properties more productive. That’s based upon ideas. Ideas are where wealth is created. That’s the basis of real estate development.”

FEOH—history buff Donahue came up with the name based on an ancient Nordic symbol that means, in part, “land” and “new things”—mostly works with the retail industry, helping tenants find suitable properties and helping property owners find tenants. In the past few years, it has helped two Starbucks stores open and has worked to find tenants for properties at Granville Square at the new Exit 153 off Interstate 79.

But the firm’s flagship project has without a doubt been assisting in the expansion of University Town Centre, for which FEOH has been broker, and the West Virginia Black Bears baseball stadium. That project evolved as the Donahues worked with developer Mon-View to figure out what to do with one parcel of land left after the opening of the Walmart there. The success of that expansion turned out to be bigger than anything the Donahues could have imagined. “To finish a 60-acre project, sell it out completely, build the ballpark and the interchange in five years, I think is pretty amazing,” he says. “I will say this: Walking across that baseball stadium field when the stadium had its first game and the Pittsburgh Pirates owners were there and WVU leadership was there, to see it go from an idea to reality was one of the most amazing things I’ve ever felt in my life.”

It’s watching how the evolution of such ventures can impact an entire community that keeps Donahue always on the lookout for his next real estate gig. “The one thing I like about what we do, when we buy a piece of property for a client, something usually happens on that property that creates jobs,” he said. “So two people can really end up affecting hundreds of people directly. I really like that.” FEOH runs a tight ship out of its offices on University Avenue; it’s still just the two of them who make up the staff. Donahue says it’s the pair’s diverse skill set—Janet transitioned to real estate after a long career in nursing—and their cooperation that makes the team successful. “Real estate can be very trying,” he says. “It can be a lot of risk. You can work a long time on a project and it can fall apart. So having that support is critical.”

This story corrects an error in the print version that misidentified Janet Donahue.